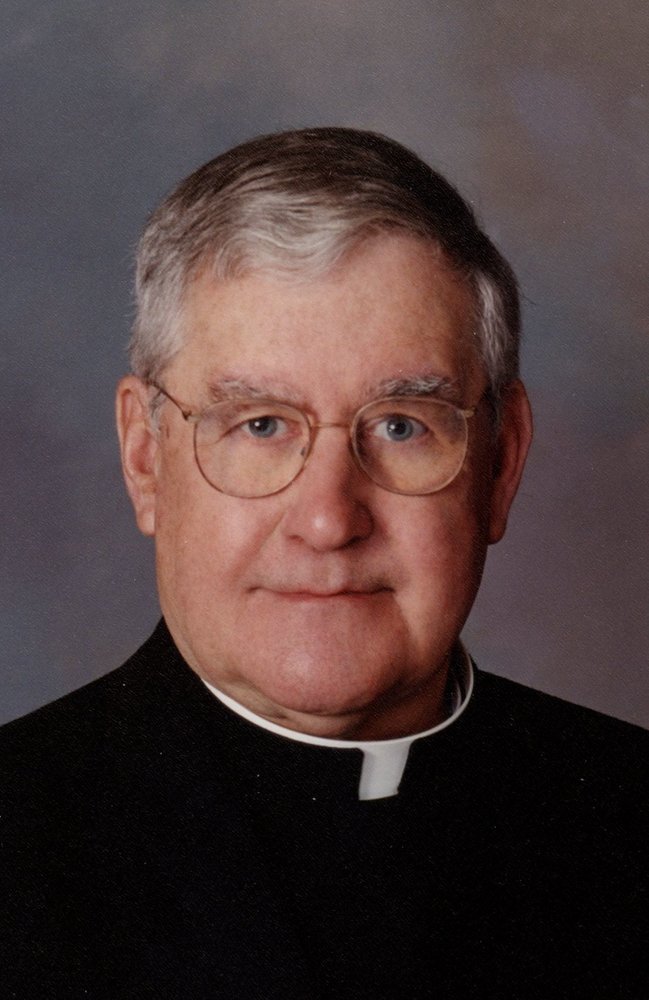 Please share a memory of Father John to include in a keepsake book for family and friends.
View Tribute Book
Richmond, VA, Father John F. French Life lived well for God and others makes dying difficult but peaceful. Fr. French lived his priesthood according to Mary's song, the Magnificat - "My being proclaims the greatness of the Lord…for he who is mighty has done great things for me." The Blessed Mother was a special role model for Fr. French and her faith and trust in God's loving care, humility and a willingness to do God's will influenced his priesthood. Rev. John F. French was called by God to his eternal home June 26, 2017 at St. Joseph's Home for the Aged in Richmond, Virginia in the loving care of the Little Sisters of the Poor. Born to William E. French Sr. and Luella Anthony French on August 1, 1928 in Albany, NY. Growing up close to his parish, St. John the Evangelist in Rensselaer New York, he was named after his pastor Msgr. John Francis Glavin and enjoyed family life with his one sister and three brothers. His years of schooling were at St. John's Academy, Rensselaer, NY taught by the Sisters of Mercy and Siena College, Albany, NY taught by the Franciscans. His years of study for the Priesthood took him to St. Joseph's Seminary, Dunwoodie in Yonkers, NY. He was ordained to the priesthood by Bishop Gibbons on June 12, 1954 at the Cathedral of the Immaculate Conception in Albany, NY during the Marian Year. Preceding him in death were his parents, William and Luella French, and his brother William Jr. (Marion), Paul (Margo), James and his brother-in-law Robert C. Foster. Fr. French is survived by his sister Joan French Foster and many nieces, nephews and great nieces and nephews. He was the celebrant at many of his family's Sacramental ceremonies, making each of these occasions so much more special. Fr. French was gifted in many ways. Keeping up with the "signs of the times" he adapted to the new programs of Vatican II. To many he was known as a priest of compassion, peacefulness, loving God, family, and parishioners. Faithful to God and priestly responsibilities, Fr. French enjoyed skiing with his friends and family into his seventies. Family celebrations and gathering of priests were important. His years of priesthood in the Albany Diocese were spent in five parishes and two schools: Blessed Sacrament, Albany; St. Teresa of Avila, Albany; St. Mary's, Glens Falls; Our Lady of Annunciation, Queensbury and St. Mary of Ballston Spa. Fr. French was the principal of St. Teresa of Avila Middle School, Albany and St. Mary's Academy, Glens Falls. During his retirement Fr. French was actively assisting at both St. Bede Catholic Church in Williamsburg, VA and the Catholic Campus Ministry at The College of William & Mary in Williamsburg, VA. To God belongs praise, honor, and glory for all eternity. The Mass of Christian Death and Burial will be celebrated at 11:00 a.m., Friday, June 30, 2017 at St. Mary's of Ballston Spa at 167 Milton Avenue with Bishop Emeritus Howard J. Hubbard as celebrant. Rite of Committal will follow at Holy Sepulchre Cemetery, on Holy Sepulchre Road, Rensselaer, in Rensselaer, NY 12144. The family will receive friends on Friday, June 30, 2017 at 9:00 a.m. at St. Mary's of Ballston Spa at 167 Milton Avenue. Arrangements are entrusted to Mevec Funeral Home in Ballston Spa. For directions or to light a candle visit us at www.mevecfuneralhome.com.
To send flowers to the family or plant a tree in memory of Father John French, please visit Tribute Store
Friday
30
June

Share Your Memory of
Father John
Upload Your Memory View All Memories
Be the first to upload a memory!
Share A Memory
Send Flowers
Plant a Tree