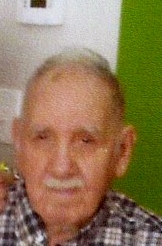 Please share a memory of Robert to include in a keepsake book for family and friends.
View Tribute Book
Town of Wilton, NY Robert J. Laroe 93 Bob has joined the angels on September 24, 2017 after a short illness. He was born on August 24, 1924. He was the son of the late David and Christine Rogers Laroe. Bob served in the U.S. Army during World War II. He retired from Pallets Inc. in Fort Edward after 40 years. He was predeceased by his daughter Rose Gordon and several brothers and sisters. Bob is survived his wife Mary Perry Laroe who he married on June 10, 1979, his children Mary (Lee) Haas, Donald (Janice) Bennett, Peggy (Rick) Bennett, Tracy (Wayne) Chapple, Scott Bennett and Bobby Jones, 17 grandchildren, 19 great grandchildren, several nieces, nephews, 2 sister in laws, 1 brother in law and wife. Calling hours will be Thursday, September 28 from 5:00PM to 7:00PM at Wilton Funeral Home, 395 Ballard Road, Wilton, NY. Graveside services will be on Friday, September 29, 2017 at 10:00 am at Gurn Springs Cemetery, Ballard Road, Wilton. Special thanks to the staff at Saratoga Hospital ICU unit The family suggests memorial contributions in Bob's name be made to Wilton Emergency Inc. 1 Harran Lane, Saratoga Springs, NY 12866. For directions or to light a candle visit us at www.mevecfuneralhome.com. »(Do not delete this line. It does not print. Text that is to appear on web must be entered before this line)
To send flowers to the family or plant a tree in memory of Robert Laroe, please visit Tribute Store
Thursday
28
September

Share Your Memory of
Robert
Upload Your Memory View All Memories
Be the first to upload a memory!
Share A Memory
Send Flowers
Plant a Tree