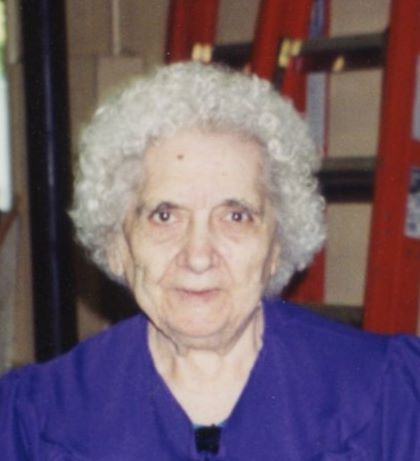 Please share a memory of Agnes to include in a keepsake book for family and friends.
View Tribute Book
Ballston Spa, NY Agnes M. Capone 92 Agnes died at home on Tuesday, August 29, 2017 She was born in Ballston Spa, NY. She was the daughter of the late Stephen and Anna Misirish Jurscsak. She also served in the US Army during World War II. She worked for many years at the former Ballston Knitting Company in Ballston Spa. Agnes received her honorary high school diploma in 2002 from Ballston Spa High School for her wartime service. Agnes was predeceased by her husband Daniel N. Capone, her brothers, John, Michael, Joseph, Stephen, Andrew, her sisters Anna Fillmore, Nellie Hamilton, Elizabeth Jurscsak, Mary Haskell and Veronica Clements. Agnes is survived by her daughter Stephanie A. Capone of Saratoga Springs, her grandson, James D. Capone (AKA James D. Palmer) of Ballston Spa, several nieces and nephews Calling hours will be on Saturday, September 2, 2017 from 9:00 am to 11:00 am followed by a service at 11:00 am at Mevec Funeral Home, 224 Milton Avenue, Ballston Spa. Committal service with military honors will follow at St. Peter's Cemetery, West Avenue, Saratoga Springs Family suggests memorial contributions in Agnes name be made to American Cancer Society, 1 Penny Lane, Latham, NY 12110. For directions or to light a candle visit us at www.mevecfuneralhome.com.
To send flowers to the family or plant a tree in memory of Agnes Capone, please visit Tribute Store
Saturday
2
September

Share Your Memory of
Agnes
Upload Your Memory View All Memories
Be the first to upload a memory!
Share A Memory
Send Flowers
Plant a Tree