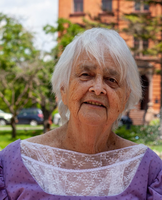 Dateline: Wilton, NY Marilyn Elizabeth (nee Kemp) Rothstein, 81, of Wilton, NY passed away on August 3, 2020. She was the beloved wife of 55 years to Jack H. Rothstein, and mother to daughters Rachel A. (James) Gray and Sarah I. (Christopher) Smith. Her son, Chris Laurence Craig Rothstein, preceded her in death. She was the beloved grandmother to Rebecca Rothstein, Miriam Straw, David (Kelsey) Rothstein, and Andrew Rothstein, and adoring great-grandmother to Ravenna, August, and Lucius Rothstein. She is survived by her brothers David (Terry) Kemp and Leonard (Dell) Kemp, and many nephews, nieces, and their children. Her sisters Frances Bell, Muriel Roy, Marjorie Darling, Emily Rosko, and brothers Louis Kemp, Jr. and Richard Kemp preceded her in death. She was born on September 5, 1938 in Oxford, Massachusetts to parents Louis and Leslie Kemp. She was the youngest of nine children and "Kiki" to her siblings. Her family's colonial Massachusetts roots nourished her lifelong interest in the study of Puritan New England, which was the subject of her many public lectures on the topic and the setting for the mystery novel series she authored under the pen name M.E. Kemp. She proudly maintained her Massachusetts accent, despite spending most of her life in New York State, mainly in Delmar and Saratoga Springs. Marilyn's positive outlook and joie de vivre fostered many cherished, long-lasting friendships. She was an avid reader who held many wide-ranging interests, including history, literature, politics, music, and dance. She held leadership roles within a variety of organizations throughout her lifetime. A lifelong feminist, she pursued her college education despite family expectations and fought for women's rights and social justice. She was a woman who went through life with no prejudice. Thankfully, she battled stage 4 cancer with good spirits, a healthy appetite, and minimal discomfort until the final week of her life. There will be no services. To honor Marilyn, donations can be made to your charity of choice.